Recently I had occasion to research the history of the town of Hartland, Connecticut, and discovered that in 1930, its population was 296 – which made it only the second smallest town in the state (Union had 196 residents).

That inspired me to take a look at which towns are currently the smallest.  The most recent year for which I have complete data is 1990, so here’s a quick map of the five smallest towns, plus the ones with populations under 5,000:

(Readers from outside New England may be confused by the map and my references to “towns.”  In Connecticut and other New England states, all the territory is divided into towns, and the number of residents or absence of a cluster of residences and businesses are irrelevant.  As are counties.  Hartland (pop. 1,866 in 1990) is just as much a town as Hamden (pop. 52,434 in 1990) – and as the City of Hartford (pop. 139,739 in 1990), which gradually expanded to encompass all of the former Town of Hartford.  People from New England tend to have trouble with the concept of “unincorporated territory” – trust me, I was one of them.)

Anyway, let’s make this post a little more historic, shall we?  Since I started with an interest in 1930 population figures, here’s a map of population in 1930: 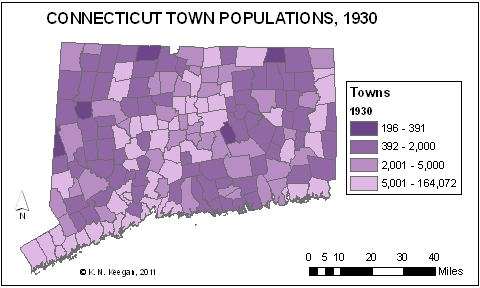 What does this tell us?  Mainly that in 1930, Connecticut was still highly rural – despite having been a major industrial state for many decades.  Also that the 1.6 million people who came to the state between 1930 and 1990 did not concentrate mostly in the cities – but rather, in the suburbs and in places even further out from the cities than that.

But another way to look at all this is: What has the population of those five smallest towns as of 1990 been over a longer period of time?  Has any of them changed radically?  This is easily answered with a simple line chart:

Over 110 years (I looked up the population for 2000 for these five), two patterns emerge.  First, these small towns have always been pretty small – under 1,000 in 1890.  Second, between 1890 and about 1930, these small towns’ populations fell, before starting to rise, consistently but not hugely, over the next seventy years.

What larger trends do these changes reflect?  First, the decline of agriculture as a form of employment.  This actually began earlier than 1890, as Connecticut farms were largely unable to compete with Midwestern producers of grain and other products that travel well.  Second, the suburbanization trend that had started before 1920 (with the development of streetcar networks) and accelerated in the 1940s with the widespread adoption of the automobile and construction of roads for it.

But you’ll notice that these small towns are still small – just a bit larger than they used to be, and much more unusual when compared to the rest of the state.

3 thoughts on “Small towns in Connecticut”