One of the benefits of doing public history is the opportunity to research things that I never would have thought to look into on my own.  For example, last year I was asked to research the history of a school.  In addition to finding information about the building itself, my remit also included the educational context.  As a result, I found myself reading a series of annual reports from the “Board of School Visitors,” the municipal committee once tasked by Connecticut state law with monitoring schools’ performance and setting local policy. 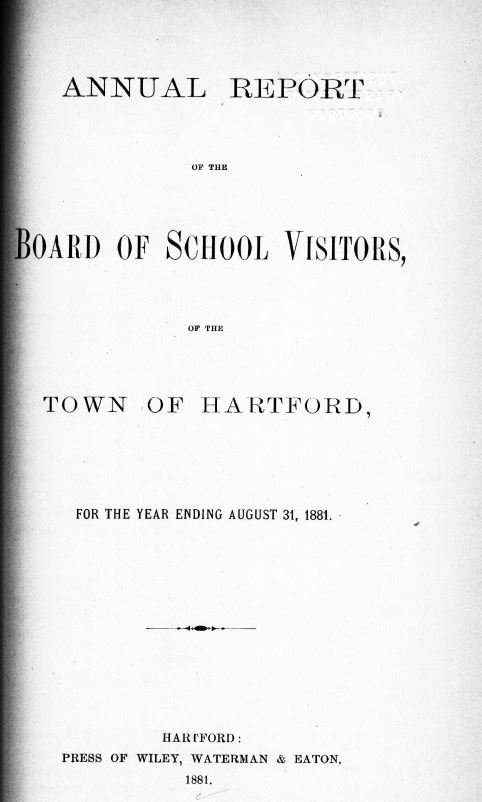 A lot of it is routine stuff and pretty dry, but this 1881 report (written by, or at least under the direction of, John Henry Brocklesby) had a lot to say about educational philosophy and the needs of the school system – all in Victorian prose that even I have to admit is stylistically wearisome.

But what I wanted to talk about is how words change meaning over time.  Take the word “tact,” for example.  To me it means something like good manners, a sense of appropriateness, and a good ability to handle difficult situations – roughly what a modern dictionary says.  My trusty 1881 high school dictionary says it meant “Nice perception or skill,” with “nice” in turn meaning “Pleasing; exact; fine; refined; squeamish” (and “squeamish” meant “Nice; fastidious; dainty”).

But to Brocklesby the word had a much broader and deeper meaning.  “Tact,” he said at page 25,

is broad and deep, and wholly sympathetic. It is ever ready to give the reason why, it explains a second time, it leads up to an idea. … It embraces so much that is wholly indescribable in words that an attempt at complete definition would be simply inadequate. It is, in part, sympathy, perception, guidance, persuasion, anticipation, naturalness, order, cheerfulness, affection, government by reason rather than by power, instruction from the standpoint of usefulness to the pupil rather than by compulsion merely, foresight based upon the idea of the best moral and intellectual accomplishments for the scholar rather than the notion of absolute duty to the child, or the gain of reputation for oneself in the line of successful teaching. All this the instructor of the primary department should have, and, if possessing tact, will be found to have.

You see what meant about his prose, I’m sure.  The other thing I wanted to point out, however, is how little has changed over the 140 years since this was written.  Brocklesby went on to explain the effect of such a paragon’s influence:

The school room mirrors the teacher, and the primary department which shows a set of children orderly, bright and natural in appearance, unabashed at a new face or an outside question, keen to listen and observe, unforced, unconscious as to rules, but in strict accord with them, respectful, ambitious to the point of fair desire, but no further, is pretty sure to have at the head of it a teacher who relies mainly on her tact for the results of her efforts ….

Nowadays the trend is to insist that a good teacher is able to successfully teach any child, no matter what disadvantages they have at home, so that all of them can pass an endless chain of standardized tests.

Brocklesby did not suggest issuing magic wands to teachers to help them get such results, any more than modern education policy wonks do.  But he did suggest that in order to attract the best teachers, they should be paid “salaries equal to those now given to instructors in higher grades.”  And he didn’t even hint at inflicting retribution for any lack of progress in results.