What should we think of slaveholders who freed enslaved people in their wills? On the one hand, I suppose it’s great that they did that. On the other hand, what kept them from doing the right thing while they were alive? Sometimes I think they had Judgment Day in mind, and hoped this gesture would help their case in the afterlife. But I also think that they’d lost track of the fact that all of their deeds would be measured, and that holding a person in slavery was a choice they made every day for years. I doubt that a last-minute change of heart had as much effect as they hoped.

And then there’s this guy. Apparently, Phyllis had made herself so useful and congenial that the slaveholder not only allowed her to marry a man named Sharper, but planned to free her in his will. But not only that, he went to the trouble of writing up a separate document confirming the intentions of his will:

Whereas I have, in my last Will, given to my Servant Gal Phyllis, her freedom at my death, all her wearing Clothes & bed Clothes, & all that she calls & owns for and as her own, & ten hard dollars, & also liberty to build a small house at the east end of my rope walk lot, with land round it for a garden spot, described in sd Will, to enjoy during her life & the life of her Husband Sharper, the longest liver, & have ordered my ex[ecutors] not to interrupt or hinder the Same, all which I hereby Confirm & establish …

Notice that like in many of these documents, he squeamishly substituted “servant” for “slave.” But he did write it up. And he not only gave Phyllis her freedom, but her belongings, cash money, and the right to live on a plot of his land for her life and/or that of her husband. This was far more generous than what most slaveholders did.

But he didn’t actually do it all while he was still alive.

This document was dated December 21, 1785. According to the land records, there were no witnesses to it, and – interestingly – it was not filed on the record until May 11, 1793. Without looking at the slaveholder’s probate record, it’s not clear why there was this delay; perhaps Phyllis produced it during the probate process and the judge ordered it recorded, perhaps Phyllis decided to record it herself, perhaps the executors – whom either Phyllis or the slaveholder obviously feared might not carry out his wishes – chose to record it.

I was astonished when a quick Google search turned up a 2012 paper on marriages at Trinity Episcopal between 1768 and 1800, based on Early Connecticut Marriages as Found on Ancient Church Records Prior to 1800, Vol. 7 (available on the Internet Archive), which specifically mentioned Sharper and Phillis … and also someone else. The entry from the book is as follows: 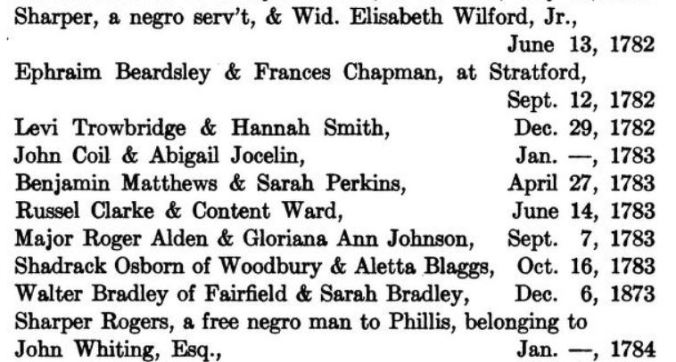 So, this says that Sharper, an enslaved man, married a white woman in June 1782. Now, that’s not impossible (Connecticut law did not make it illegal), but honestly I’d want to have a second look at the record to see if the transcriber got it right. It certainly would have been a huge scandal.

Then, as you see, it says that Sharper Rogers, a free man, married Phillis, an enslaved woman, in January 1784. Were they the same Sharper? It’s an unusual name, so perhaps they were, but perhaps not. But at least from this, we know that Phyllis and Sharper had been married for almost two years when the slaveholder wrote up the document about the eventual freedom of Phyllis.

A single Sharper appears in the 1790 census:

So presumably this is Sharper and Phyllis. I haven’t failed to notice that so far, it’s only the marriage record that gives him a surname, so it’s an open question whether it really was his surname. The 1800 census returned a Sharper Mix (in a family of 4) in Wallingford, which is in the same county as New Haven:

I know there were Mixes in New Haven as well, but I’m not at all convinced he’s the right guy. He appears in Wallingford again in 1810, in a family of 3, and after that there’s nothing in the county.

So that’s the end of the line on this quick research. I believe, based on the filing of the one document on the land records, that somewhere near the waterfront in New Haven, there was once a small house near the rope walk in which Phyllis and Sharper were able to make a life for themselves, together, as free people – despite the earlier, day-by-day moral failings of the former slaveholder.